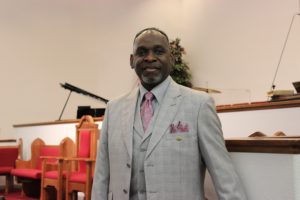 The Reverend Dennis L. Nash is Macedonia’s third Assistant Pastor and first male since our founding in 1954. Reverend Nash is a native of Leesburg, Florida. In the early part of his life, he was an active youth and young adult in The House of God. At the age of 9, Reverend Nash accepted Jesus as The Lord and Savior of his life and received a portion of the Holy Spirit. The call of God on his life was very apparent at a young age. In 1973, Reverend Nash joined Macedonia Church of the Living God. It was under the tutelage of our Founding Pastor, Reverend Dr. Lula P. Richardson that his gifts continued to flourish. While continuing to serve faithfully under the administration of Pastor Emeritus Juanita M. Smalley, his call to preach The Gospel was manifested.

In December of 1995, Reverend Nash accepted the call to preach The Gospel. In April of 1996, he became a Licensed Minister and on April 17, 1999, he was ordained by Bishop Dr. L. Delores Simmons-Ward, Presiding Prelate of the Florida Atlantic Diocese in the Church of Living God. Reverend Nash brings many gifts to the Body of Christ. He is a psalmist, musician, a prolific instructor of the Scriptures, an anointed preacher, and a servant of God. You will often hear him say that everything he does is “All for God’s Glory!”

Reverend Nash has been married for 35 years to Fleeter McKenzie Nash, Macedonia’s Minister of Intercession. They have one son, Ryan, daughter-in-law, Carmen, and two grandchildren, Harper Kaye and Noah.