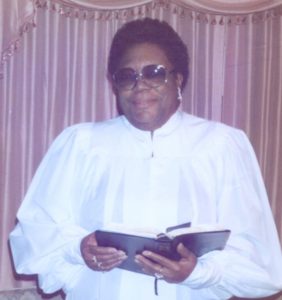 Dr. Richardson birthed a church with a humble beginning. She and her members worshipped in several storefront buildings from 1954 until 1956. They rented from the late Mr. Andrew Floyd, first on Main Street and later on Pine Street. The last storefront building, located in Carver Heights area on Bradford Avenue, was rented from the late Mrs. Mammie Mike. In 1956, Dr. Richardson and 12 members built a church at 826 Dixie Avenue. She said, “I just don’t know how we did it. The Lord was just on our side.”

Pastor Richardson was a humble woman, a praying woman, as measured by those whose lives she touched, helped and enriched. She was a great woman of God. She was an economic developer, who not only taught people how to live spiritually, but economically as well. As an entrepreneur, she shared her knowledge and experience with any and all who would listen. Pastor Richardson was a philanthropist. There were many young people she helped get through college who perhaps would not have been able to finish without her assistance. The leadership she provided left her parishioners with encouragement, spiritual growth, unity, love for one another, and prosperity.

Dr. Richardson was united in Holy Matrimony to the late Trustee Alva P. Richardson on August 16, 1977. Trustee Richardson preceded her in death. Though the couple had no biological children born to their happy union, many grew to love them as parents.

Pastor Richardson died on November 26, 1995. Elder Juanita M. Smalley, niece of Pastor Richardson was appointed as Pastor of Macedonia by Bishop Jesse J. White, Sr. The ministry of Elder Juanita Smalley would pave the way for her congregation to make the transition into the new millennium. Elder Smalley, a trained educator and administrator, took the reins of leadership and the church to higher heights. She raised the bar for teaching and training by focusing on literacy as a priority for congregational growth and development.

In 1996, Elder Smalley appointed her daughter, Rev. Dr. Shelia Y. Smalley, then a university assistant professor in the College of Education at the University of Central Florida, as her assistant pastor. Rev. Dr. Smalley, an accomplished orator, prolific writer/researcher, and Bible scholar rounded out a dynamic-duo with the training and capabilities necessary to usher in a Bible-based literacy movement that was both life-changing and generated hope for calls to revitalize the surrounding neighborhoods through community and economic developments.

These two dynamic leaders, mother-daughter ministry team, in just six short years lead their members in the purchasing and sales of properties and built an edifice where they presently worship located at 1610 Griffin Road. The Festival of Dedication of the new edifice was held on June 8, 2002 with great pageantry befitting such an honor.

June 10, 2006, four years later, the church united to celebrate the liquidation of all financial liability for the brick and mortar of this edifice. The members of Macedonia and the Leesburg community look forward to implementing the new vision of the dynamic-duo, Presiding Elder Emeritus Juanita M. Smalley and Rev. Dr. Shelia Y. Smalley.

On May 18, 2013, after the retirement of Presiding Elder Emeritus Juanita M. Smalley, Rev. Dr. Shelia Y. Smalley was installed as Pastor of Macedonia.